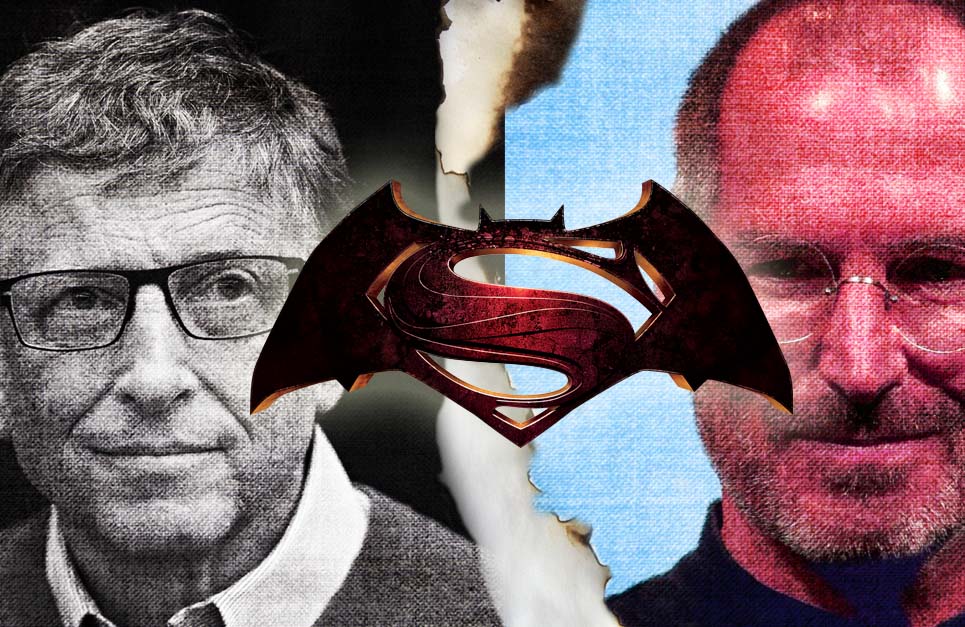 The excitement is undeniably in the air for this weekend’s iconic battle between our fictional heroes Batman and Superman. You might be wondering why they are even fighting in the first place. Immediately, it is apparent that the movie is not a straightforward versus movie, as the abbreviation “v” was chosen by the film’s director Zack Snyder deliberately. This subtle way gears us up for the alliance fortified (aka Justice League “JL”) between these colossal titans and introduces other JL members such as Wonder Woman and Flash for their first cinematic debuts. Of course we all want to see what extent their strengths and weaknesses will be tested on the big screen, but the collaboration is what saves mankind in the end. This brings us to the aggressive rivalry and collaboration between the corporate conglomerates Apple and Microsoft, and their co-founders, the late Steve Jobs and Bill Gates. It is uncanny how many of their character-building traits and forged alliances are similar to Batman and Superman’s. We compiled the cornerstones of these four legends that are no strangers to fortifying weaknesses with alliances below.

For the sake of argument, Gates will be compared to Batman, and Jobs to Superman. Let‘s explore further.

Before he embraced his fear of bats and became Batman, Bruce Wayne was always enraptured with humanitarianism. Fear of self is the only thing that can stand in the way of true greatness. Batman’s intellect and moral code symbolizes how we can be common, yet still find alternate resources to better mankind. What makes him invincible is his survival instinct to build a foray of defenses against super-heroes and super-villains since he lacks any special powers. He knows everyone’s weaknesses and this is the edge he uses to protect the innocent.

Gates is the epitome of a brave pioneer in the business world. Known as the best business deal ever made, young Gates shook hands with IBM upon their request for an operating system that didn’t even exist. Immediately Gates purchased an operating system for $50,000 from a small software developer and licensed it as MSDOS. This bold move made Microsoft a fortune and changed the personal computer industry forever. Gates then set out to change the world again, only this time empowering others with his foundation’s staggeringly philanthropic and education efforts.

Unlike Superman and Jobs, where Batman and Gates lacked in natural talent, they made up for with innovation and humanitarianism. Gates was an aggressive business man that created a legacy like his mentors- Rockefeller, Carnegie, and Buffet with philanthropy. Gates is considered to be the richest and most humble man on the planet but never took for granted what he accomplished.

Being adopted, Jobs felt superior from an early age knowing he was chosen. His unconventional way of thinking propelled him through life. After his pilgrimage to India, Jobs’ sacrificed everything he owned, surrounded himself with bright minds and became a leading force of the personal computer revolution. Jobs would never settle for less and many were threatened by this. He was a charismatic dreamer that reached out to everyone to support his mission. Jobs showed the world an alternative to a cold unaesthetic computer and it was called Apple.

Superman is not from Earth and was adopted by Kansas farmers. Having superpowers that are unfamiliar to the world, Superman tries to save every person he can. Being different and considered a threat more so than a hero by some, Superman’s mission was always to promote world peace. When he first started his mission, he worked alone and created enemies quick; one of them being Batman. It wasn’t until JL was formed that the message of peace became strong.

Not Always a Walk in the Park:

A huge issue that Jobs and Superman both had to face was keeping themselves in line. Superman was not always fully aware of his massive powers and could easily harm someone without even trying. Jobs was once fired from Apple, his own creation, because it was assumed the company was better off without him.

During the early rise of Apple and Microsoft, Gates and Jobs helped and hurt each other several times. However, in 1999 Apple was on the verge of bankruptcy and Gates was found guilty for monopolizing the market. Ironically, during the same time Jobs needed the financing to save Apple. Jobs knew Gates could be the solution to Apple’s revitalization and Microsoft desperately needed the competition. Even after considering the long history of backstabbing battles between them, Jobs still made the call. Gates happily accepted and the powerful iMac was born.

What If These Alliances Didn’t Exist?

Apple’s hallmark of thinking differently wouldn’t have produced the iPad or iPhone you are probably reading this on. Or the technology that changed the way the world communicates and depends on to reach their loved ones in the best and darkest of times. The Bill and Melinda Gates Foundation wouldn’t have eradicated Polio globally, or be capable of providing vaccines to an estimated 7.6 million children under five by 2019.

In the end, Jobs and Gates had a bittersweet friendship that amplified each other’s strengths when aligned. They were so close, that Gates’ personal note to Jobs was kept next to him on his deathbed. These brilliant minds dominated the technology industry and revolutionized the world. In comparison, Batman and Superman are complete opposites and yet their relationship evolved. Together they were able to form the JL who fought for justice and saved the world from the worst villains.

1. Embrace our fears and know who you’re up against
2. Think differently and passionately
3. Leave a footprint for mankind
4. Competition is great but collaboration is what moves us all forward