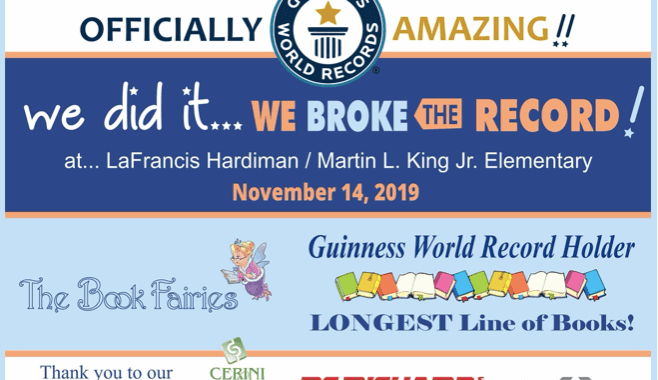 The nonprofit organization, The Book Fairies, has officially set the Guinness World Record for the longest line of books. After a total of three hours, 150 volunteers, and 31,000 books winding through the halls and gyms of two Wyandanch schools for 3.81 miles, The Book Fairies broke the original world record of 2.6 miles of books set in Illinois in 2017.

The Long Island-based organization strives to fight illiteracy and raise awareness by donating books to underprivileged communities across Long Island, the New York Metro area and even oversees. One in four New York City residents cannot read above a fourth-grade level, and two-thirds of students who cannot read proficiently by the fourth grade will end up in jail or on welfare. That is why The Book Fairies organization helps communities in need by bringing literacy and making childrens’ futures brighter.

The 31,000 books used for this event were donated to Wyandanch residents. Each book was sponsored at $5 and the funds went towards the distribution of 500,000 additional books for the communities and schools that desperately need them.

In addition, The Book Fairies recently donated its two millionth book, continuing to make strides around the world and bringing their mission to the lives of millions.

This article was also featured in our newsletter Lesson Plan Vol. 22