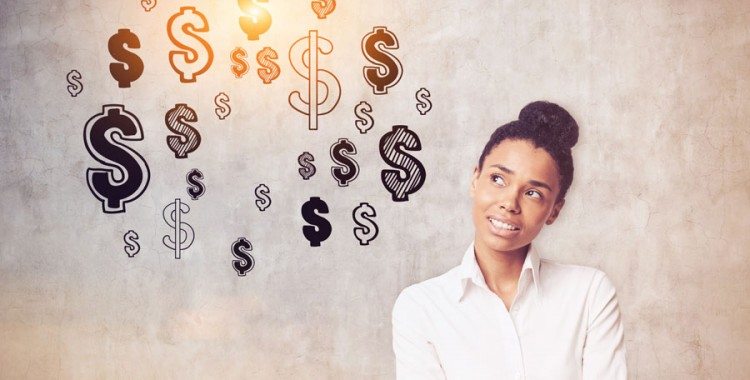 Following the House Ways and Means Committee release of their draft and markup of the Tax Cuts and Jobs Act (TCJA), the Senate Finance Committee released its bill on Thursday, November 9th. Like the House bill before it, the initial release called for substantive changes in the tax code, and has also been subject to a markup and amendment subsequent to release. Feeling political pressure, both the House and Senate have been fast-tracking these sessions and releases, leaving little time for in-depth analysis. Knowing this, we decided to wait until this week, after having two full days in committee, to give our thoughts on the Senate bill. We still find ourselves in a huge state of flux. The below information is as of the proposal released on November 14, 2017.

Based on the current political environment, it is our feeling that any tax changes that are passed into law will more closely resemble the bill put forth by the Senate, rather than the House, which recently passed its own bill. The majority in the Senate is razor thin at only two seats. Any more than two no votes on the bill means it cannot pass with a simple majority. Further, both the Senate and House bills have to comply with the Byrd rule, meaning it cannot increase the deficit after 10 years. The amount of cuts therefore is limited to $1.5 trillion over the 10 years, and both the Senate and House bill are right up against that limit.

As evidenced by the numerous changes the House bill has undergone since its first proposal and our analysis, and even more so by the massive changes the Senate TCJA has experienced, these bills are in a weird state of limbo: in the early stages where a lot can change and it’s too early to plan, but in the mature stages where it may be close to passed legislation. That being said, it is still our feeling this bill will not pass in its current form. The addition of health care into this bill (via the removal of the individual mandate), complete lack of State and Local Tax (SALT) deduction, and concerns about the deficit and sun-setting provisions are all major hurdles among many to the passage of this bill in its current form.

On top of being a massive change to the current tax code, the Senate TCJA also is a massive departure from the House TCJA. Like the House bill, the Senate bill is very business-focused and is aiming to simplify taxation for individuals while providing a tax cut. The Senate TCJA was very robust in terms of proposals, many of which are complex and require deep analysis to fully comprehend the effects. Some of the most notable areas we see are: 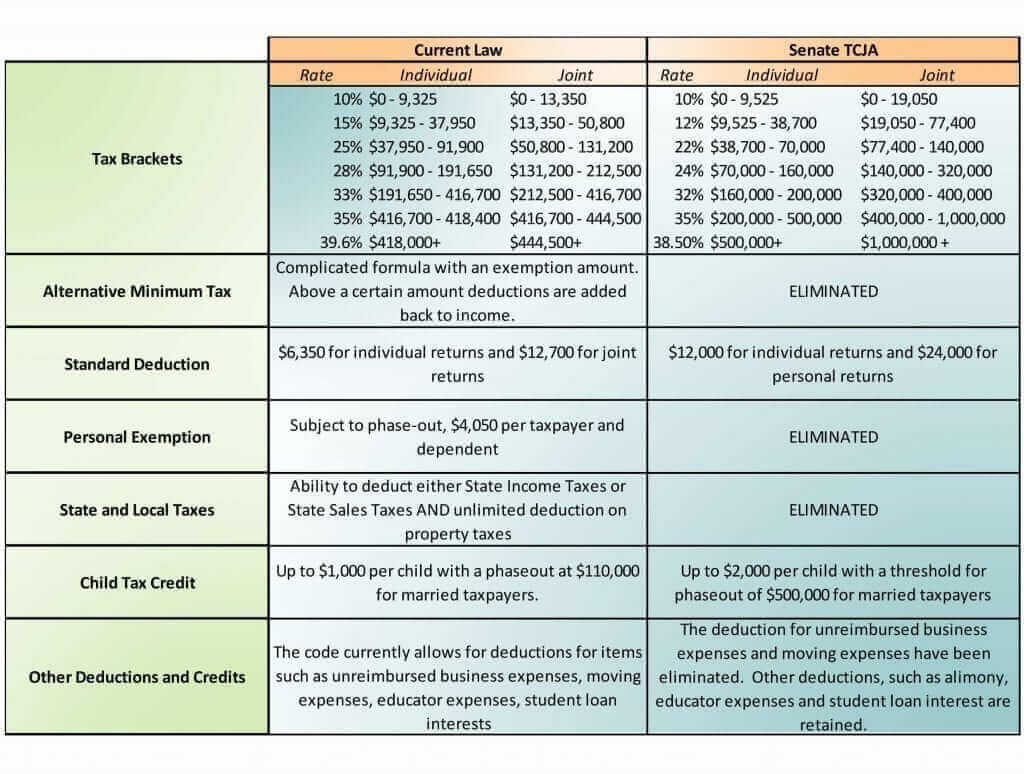 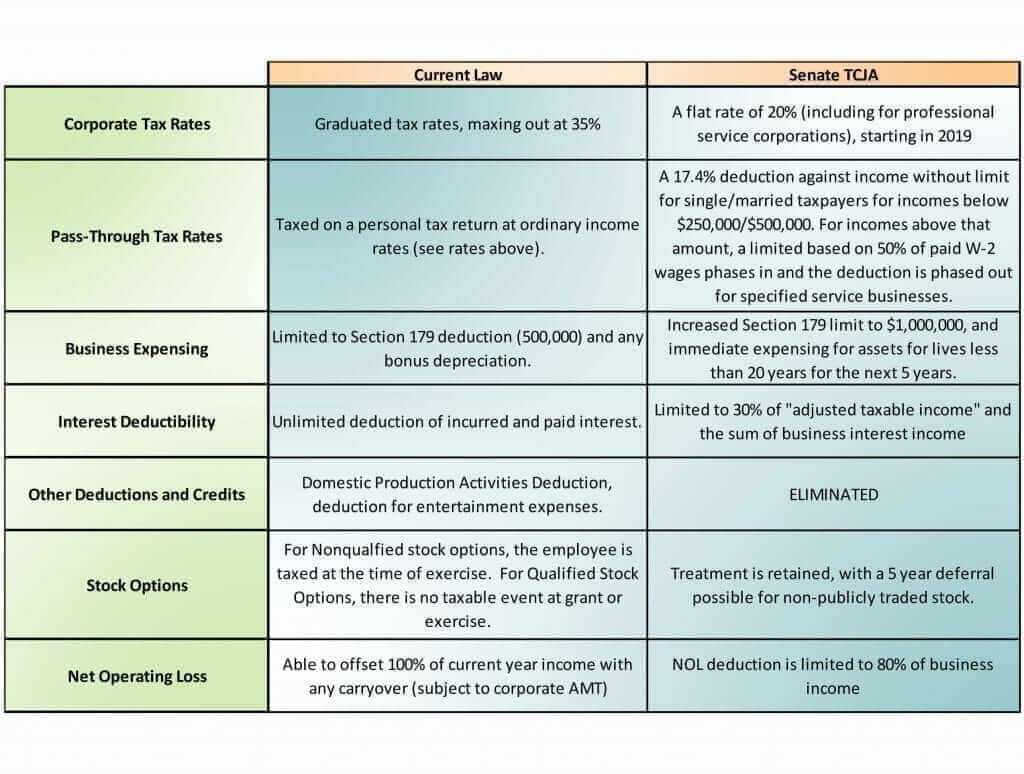 The above information is meant as a simple summary of some of the most notable and impactful to our clients in a broad sense. They are neither all-inclusive, nor do they provide much technical detail as to how these changes may impact taxpayers. There are also major changes to the estate tax (an increase in the exemption), luxury automobile depreciation, fringe benefits, and accounting methods.

Of these proposed changes, we feel that areas of focus for our client base are: taxation of pass-through entities and the SALT deduction. The Senate relief for pass-through taxation is broader than the approved House bill, with a 17.4% “deduction” again the pass-through income, thereby lowering the effective rate by that amount. This deduction is unlimited for income below $500,000 for married taxpayers and $250,000 for individuals, including professional services. This even represents a change from the original proposal, which had limits of $150,000 and $75,000. There was also further clarification on the limitation being for W-2 wages, which on first read was thought to be only for wages paid to the pass-through owner, but rather now is thought to mean to wages paid to all employees. The Senate bill has a complete elimination of SALT deductions; however, the House has made it clear this will be one of the first items addressed in Joint Committee.

We have also been paying close attention to changes on the corporate side, as these can affect many of our technology clients. The reductions in rates are no doubt a welcome relief, but the uncertainty of changes in stock-based compensation was of particular concern to us. The changes written in the markup reflect the important of equity compensation in these companies and show not only a continued deferral on options until exercise, but also a deferral upon exercise. Lobby groups in Silicon Valley have had some success in getting their concerns through to the Senate.

So What Comes Next?

The House bill was passed on Thursday, November 16th. The Senate bill is still undergoing revisions and input and has an expected vote occurring after Thanksgiving. From there, both chambers will have to reconcile their differences to present one final bill for Presidential approval. Once the two chambers are in Joint Committee, it will then become much clearer what the final proposed changes will be. Even then, with some of the large areas of disagreement, the compromises required may create a new bill that one of the chambers is unable to pass.

One area the Tax and Business Advisory team at Cerini and Associates always like to stress is the importance of having a tax plan. We work with our clients starting almost immediately after their prior year return is filed in order to best plan for the next year, projecting tax due and helping implement tax saving methods. This uncertainty in what lies ahead in 2018 and beyond has made this very difficult. Undoubtedly, whatever the final plan looks like will present itself with opportunities to plan for tax efficiencies in the future. We just don’t know what the form of that will be yet. We will take the time once the dust settles to evaluate any passed legislation in full and reach out to all of our affected clients about the best path forward.