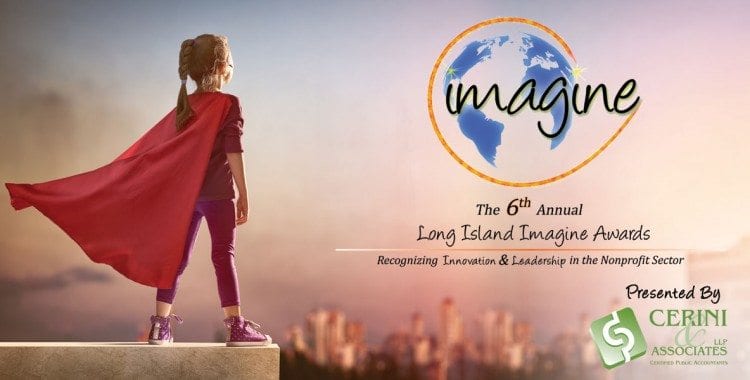 With over $27,500 in total prizes to the winners, and free videos were given to each of the 20 finalists, the night is hailed as the “Academy Awards” of the Long Island nonprofit scene. The Imagine Awards, however, is about much more than an award; it is about bringing the sector together to create a more impactful and innovative sector moving forward.

Considering more than nine months of planning, this award competition is unlike no other event on Long Island. The event was originally “imagined” in 2012 by Ken Cerini, CPA, Managing Partner of Cerini and Associates, LLP the Awards’ founders, and has been picking up tremendous momentum each year. “The night is all about the nonprofit sector, honoring those that truly make a difference on Long Island 365 days a year,” said Cerini. “This year’s finalists and winners were all amazing. They truly exemplify some of the best the nonprofit sector has to offer.” The Long Island Imagine Awards receives hundreds of applications each year from Long Island-based nonprofits who want to spotlight their innovation in programming, social impact, the strength of leadership, and overall excellence. Winners are announced live at the event after their videos are premiered in front of an audience filled with over 400 of their peers and supporters. Each finalist receives a complimentary video, and the winner in each category also receives the Imagine Award Trophy and the $5,000 award. An additional $2,500 was awarded to a Fan Favorite online campaign, chosen by fans on Facebook. Nearly $130,000 has been distributed since the Imagine Awards began six years ago. “Our firm was thrilled to sponsor and present The Certilman Balin Adler & Hyman, LLP Leadership Excellence Award,” said David Goldstein, Esq., Partner of Certilman Balin Adler & Hyman, LLP. “We have an abiding appreciation for the powerful impact that the nonprofit sector has on the lives of Long Islanders every day. We are honored to be a part of recognizing and celebrating the nonprofit sector’s achievements.” “The nonprofit sector needs all of us, just as much as we need it,” said Cerini. Government cutbacks, ever-changing tax laws, and ongoing audits are making it tougher for agencies today than ever before. “We need a night to recognize the nonprofit sector; shining a light on the truly magical and selfless accomplishments that come from the more than 3,500 nonprofit agencies that call Long Island home,” said Cerini. “They say one person can make a difference…imagine being in a room filled with so many inspirational people that do,” said Tom Buonaiuto, President and COO of Empire National Bank. “For one night, we get to cheer on the Long Islanders who gratefully accept easing the burdens of others each day. We are honored to support and present the Empire National Bank Innovation Imagine Award.”

This year’s MC was News 12 Long Island’s Doug Geed. What Doug enjoyed most about the night was that the Imagine Awards put the spotlight on some very worthy organizations. “Some are well known and deeply respected while others are new or may not get the recognition they deserve; but equally, they play an extremely valuable role in helping people feel needed, respected, and loved.” What’s more, with so many nonprofits in attendance, the night offered a tremendous opportunity for collaboration within the sector.

While the 2018 Imagine Awards has just come to a close, the Imagine Awards committee has already started the planning for the 2019 Awards, which will be held on Tuesday, April 30th, 2019, at the Crest Hollow Country Club in Westbury. Applications will be out over the summer, and the Committee encourages Long Island nonprofits to apply. Who knows, next year maybe your year.