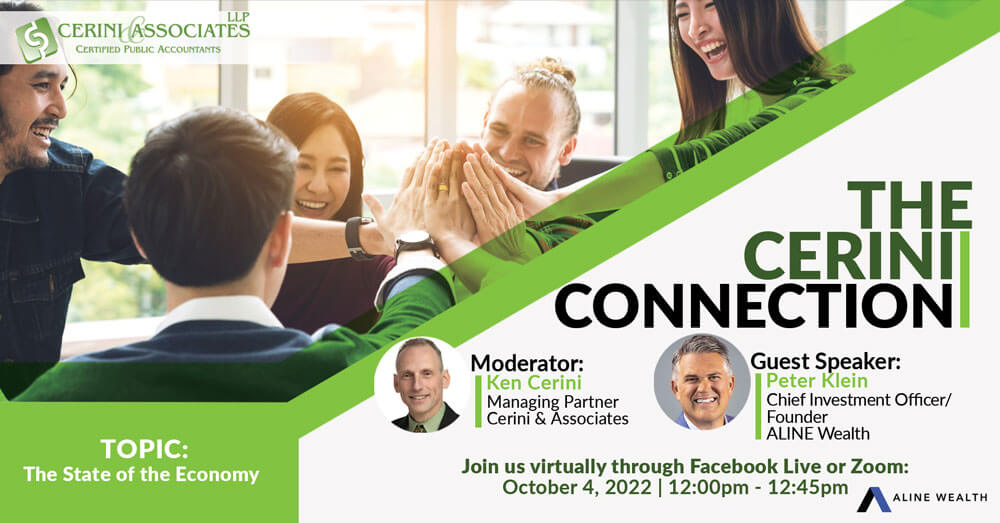 Cerini Connection – The State of the Economy

Join Ken Cerini and guest Peter Klein of ALINE Wealth for our monthly webinar series helping businesses and nonprofits! They will discuss the state of the economy.

ABOUT OUR GUEST SPEAKER 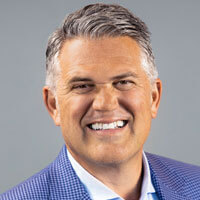 Peter J. Klein is the Chief Investment Officer and Founder of ALINE Wealth. Peter is a published author of a technical work which speaks volumes of a career immersed in analytics and the science of investing. To this deep financial wisdom, he adds considerable acumen in philanthropy, helping clients navigate family trusts, institutions, and non-profits. “There is nothing I love more than helping clients propel their business,” he says. “Except maybe helping them use the fruits of that success to benefit others.”

Peter and his team are focused on providing comprehensive solutions for your future and your legacy. A fiduciary-centric focus on delivering something even more rare: honest, client-focused intelligence, where clients come first And second. And third.

Peter earned a Baccalaureate degree in economics from Stony Brook University and a Master’s degree in finance from CUNY Baruch College in New York City. He is a Chartered Financial Analyst (CFA®), Chartered Retirement Plans Specialist (CRPS®), Chartered Advisor in and Philanthropy (CAP®). He recently received the Chartered SRI Counselor designation (CSRIC®) as part of a commitment to helping clients navigate ESG and SRI investing. Peter is the author of two well-regarded books, Getting Started in Security Analysis (Wiley, 1998, 2009) and A Passion for Giving Tools and Inspiration for Creating a Charitable Foundation (with Angelica Berrie, Wiley, 2012).

Peter was named to Forbes’ list of the Best-In-State Wealth Advisors in New York from 2020-2022. He is the recipient of the Community Impact Award by Long Island Business News’ (LIBN) 2021 Corporate Citizenship Awards. His practice was named on Wealth Management’s first annual Thrive Awards list of fastest-growing financial advisors in 2019. Peter has been honored by the Diabetes Research Foundation, as the recipient of the Gillan Family Humanitarian Award by the Child Abuse Prevention Service (2011), as Man of the Year by Life’s WORC (2013), as Philanthropist of the Year by the Long Island Alzheimer Foundation (2014), as the recipient of the Larry Kushnick Memorial Award for Community Service (2017) and named the Best Philanthropist on Long Island in 2017 by Bethpage Federal Credit Union. He was recognized by Dan’s Papers on the 2021 PowerList of the East End.

Peter has participated in panel discussions and has given speeches on the issues surrounding the nexus of wealth management and philanthropy-what he refers to as being a Legacy Agent He has a video series called “ALINE Wealth Market Roadmaps” where he provides his strategic outlooks on the markets and the economy. He also has a column in Dan’s Papers called “A Passion for Giving” where he profiles prominent philanthropists and foundation members on Long Island.

Prior to joining Hightower and Co-Founding ALINE, Peter was with UBS (Paine Webber) since 1994, where he was recognized in the UBS Global Circle of Excellence in 2008.

Peter and his wife have been married for more than 25 years and they have three children. He is very active in his community, advising private foundations in a professional capacity and volunteering on various boards. He is President of the Claire Friedlander Family Foundation and serves as Chairman of the Tilles Center for Performing Arts Council of Overseers. He sits on the boards of the Huntington Hospital, the Holocaust & Tolerance Center of Nassau County, the Huntington Library Foundation, Life’s WORC/Family Center for Autism, the Dean’s Advisory Board of Harvard’s School of Dental Medicine, the Dante Foundation, Cold Spring Harbor Laboratory Association and formerly on the board of the Long Island Community Foundation and the Bronx High School of Science Alumni & Endowment Committee.