Guest Article: The House of Development 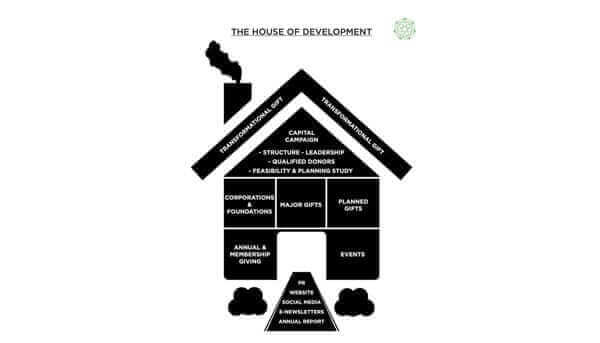 THE HOUSE OF DEVELOPMENT

The following is an in-depth description of each component part of the HOD:

Gardens are places to cultivate flowers, bushes, vegetables, and fruits. The HOD’s garden represents cultivating potential donors to a Community Benefit Organization (CBO) through story telling and information dissemination. Engaging potential donors who have an affinity to a particular CBO requires donor-centric moves-management techniques that engage individuals into considering a gift to the CBO.

ENGAGING DONORS TO GIVE

The first floor is composed of two rooms: the first for annual unrestricted giving or memberships, and the second for special or signature event(s). An annual giving program is one that incorporates mass appeal tactics and is best run with timely targeted appeals to a tactically segmented donor database.

Membership programs have levels and are popular with civic CBOs. A Special event can take many forms; the most popular are galas, breakfast call-to-actions, walk and runathons, and golf tournaments.

A signature event is highly mission centric and generally has an impressive ROI. Well-known signature events are the Napa, CA and Naples, FL annual wine and travel auctions, which each raise over $10M in net proceedings over a three-day period. Meals on Wheels San Francisco’s Chefs and Vintners Gala, which nets over $2M during a dinner, is another well known example of a signature event.

Major gift program tactics incorporate personal appeals and are done on an intimate conversational basis between the organization representative and one or a few members of the donating party. The levels for a major gift vary among CBOs. The formula to define a major gift is: 0.1% of the annual development budget. So if a CBO’s annual fund development budget is $500,000, then a major gift should be $500 and up.

An annual Case Statement should be developed to promote major gifts and programmatic areas that would specifically benefit. To view sample case statements, click here.

Corporate and foundation gifts are generated through existing relationship with individual donors who have access into both. Letters of Intent, proposals, and proper stewardship practices on how funds are being leveraged are critical to repeat investments from both corporations and foundations.

The great majority of planned or deferred gifts are bequests. There are other attractive vehicles such as trusts, life-insurance and retirement policies, annuities, and pooled funds that can be valuable to certain donor classes.

A capital campaign is undertaken for capital build-outs and/or endowment campaigns. The perceived need must be seen as real by both the CBO, its Board, and the community which supports it.

It is important to consider conducting a planning/feasibility study for the campaign goals prior to formally launching a campaign. The study provides valuable insight into campaign leadership, high-level donors, as well as a realistic yet aggressive campaign funding goal.

Directed by a campaign consultant, the CBO’s steering committee is charged with implementing all phases of the campaign over a set period of time. Phases of a capital campaign include a quiet phase, where lead and board gifts are pursued, and is followed by major and leadership gift phases that culminate with an all-inclusive community phase.

Within the industry, the most acclaimed transformational gift was made by the estate of McDonald’s heiress Joan Kroc who left National Public Radio over $200 million in her will, including $5 million to San Diego NPR station, KPBS.

She also gave the Salvation Army a gift estimated to be in excess of $1.5 billion. The funds have been specifically designated for the development of community centers across the country, similar to the landmark’s Ray and Joan Kroc Corps Community Center in San Diego.

Another example of a transformational gift was made by Bill Hewlett who had a vital interest in his adopted state of California. In 1994 Hewlett founded the Public Policy Institute of California (PPIC) in San Francisco with a gift of nearly $200 million. The organization was to be guided by the longtime president of the Bill and Flora Hewlett Foundation, Roger Heyns, Chancellor Emeritus of the Berkeley campus of the University of California. The gift was to ensure that PPIC remain uninfluenced by outside donors, agnostic in its pursuits, and completely objective in its reporting on issues impacting California. Click here for more.

It costs money to raise it. Salaries must be paid and staffs must be maintained. A rate of 13% to 16% of the overall CBO budget for administrative staff is quite acceptable within the industry. A CBO raising $500,000 annually for programs should therefore have staffed salaries in the $65,000 to $80,000 range, or in this case a development manager with a part-time executive assistant.

Effectively implementing tactics from the HOD needs to be done exclusively in a bottom-up manner.

Begin by crafting a compelling website, implementing push-pull appeal strategies and a special event, and only subsequently addressing tactics from the second floor.

Foundations and corporations like to see a strong individual donor base before investing, as well as 100% giving annually by members of the Board.

A Planned Giving/bequest program should be marketed in all relevant literature to donors over the age of 45.

For more information, please see our website. If you have an additional question, or a would like to discuss a particular situation with one of our consulting experts, please contact us through our website by submitting a request using our contact form or email us directly at contact@cogeo.us – thank you.