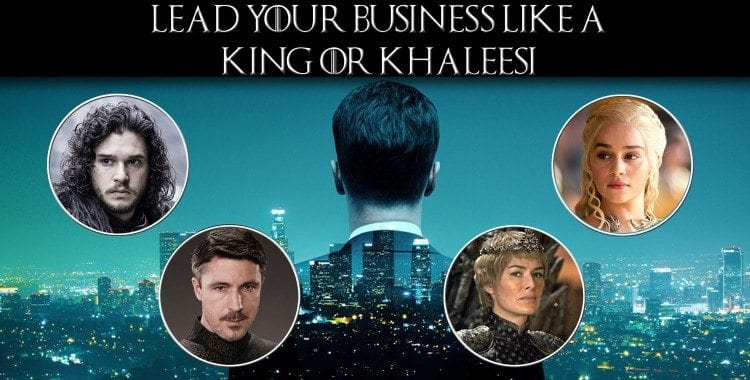 **SPOILER ALERT: If you haven’t seen Season 6 of Game of Thrones yet, you may not want to read ahead.**

Eventually, Eddard Stark was bound to be correct. Winter is here. Everything is on the line. You have stared into the abyss, and you see that war and annihilation awaits. Who will lead you to an untimely demise, and who lead you to salvation? You can ask yourself the same question when it comes to your business or place of employment. What type of leader is in charge, and are they effective in their leadership style. Game of Thrones has taught us that many different leadership styles exist, and not all leaders are effective. Let’s look at leadership styles of some of those currently in charge to see what can be learned from their individual styles.

Jon Snow (INFJ*): The King of the North

“Winter is coming” is the motto of the Stark family, although we may have learned that, that does not necessarily apply to him anymore . . . The Song of Fire and Ice dwells within him; will he lead us into battle as we face the true desolation, the White Walkers, or will he be the herald of our demise?

Solidarity: As Jon had demonstrated over and over again, he is not afraid to fight with his men on the front line. For a leader to initiate the charge speaks volumes about his character; he would not ask his men to do something that he would not do himself.

Inspirational: A leader inspires righteous actions from his followers. In season five, he gave a speech to the “free folk,” and he convinced them to look passed their differences, and to see their unity in suffering. Unity in suffering is a humbling thought, and it motivated them, they joined the Supreme Commander in battle.

Passion: A raw flame when controlled can illuminate a path unseen, but when feral, can burn down all structure. During the battle of Winterfell, Jon’s, brother/cousin, Rickon was struck down by Ramsey in his notoriously sadistic fashion. Watching Rickon die several feet away, ignited a rage in Jon, consumed by his passion for revenge he abandons his strategic positioning. He ran straight into what was obviously a trap, and it was at the expense of his men’s lives.

Leadership Traits: What often is a leader’s strength is also their greatest weakness. Jon is clearly a leader by example, he will rage into battle to inspire and rally his men, but he can also get caught up in the moment, taking unnecessary risks with unplanned consequences. Leading by example to motivate others can be effective, but you still need to ensure that you weigh the risks involved and make appropriate decisions to move your business forward. Push too hard, and it could cost you key employees.

Daenerys continues to be a strong female role model. She is entrenched in her moral values and does whatever she believes necessary to move her moral agenda forward.

Well Equipped: Personally, I would rather be on the side that doesn’t have to fight two ton, flying, fire breathing, dragons; an army of unsullied; and a fleet of ships. Daenerys has repeatedly been able to acquire the resources that she needs to build a formidable company; whether it be through trade, force, or reason.

Charismatic and Reliable: Daenerys is perceptive and can identify the strengths and weaknesses of her force. Through inspiring rhetoric, she fans the flame that burns inside them. She is also a leader that prides herself on keeping her word to her followers; when she makes a promise, she sees it through to the end. Throughout the series she has consistently fulfilled her promises with relative swiftness; however, how would she fair in the face of defeat?

Idealistic: Deanerys’ altruistic nature derives from her idealistic mentality; she sees the world for what it could be rather than for what it is. Idealism is admirable until it gets out of hand. Daenerys is the type of person to see something she deems “just” until the end, even if it is a losing battle. It begs the question, “Will her ideals lead to salvation or her destruction?” Although dragons do not burn, kingdoms do; she may survive long enough just to see the flames she ignited consume her kingdom, and all that she stood for, leaving nothing but ash.

Leadership Traits: Daenerys is a leader that understands the power of people and resources. She is able to motivate people around a common cause, based upon equal rights, etc. She has a somewhat socialistic attitude, which would make a great union leader, elevating all people to equal status and motivating them all towards a common goal. In Daenerys’ world, the end often justifies the means.

Petyr was not born into royalty, he worked his way up as a businessman, partaking in the oldest profession, prostitution.

Adroit Strategist: Petyr is an opportunist in every sense of the word; he quietly bides his time as he executes his plans and enemies with dexterity and precision. For example, he despised Ned Stark for years for marrying the woman he loved more than anything. Knowing the type of person he is, it is entirely likely he had fantasized about the exact moment of Ned’s demise thousands of times. When Joffrey was King, the opportunity to eliminate his foe arose, so he acted and did just that. All the while he nearly succeeded in completely isolating Joffrey’s mother, Cersei, and acquiring the puppet king he desired. Petyr successfully “played politics” for decades, holding that grudge, and was patient enough to wait for the opportune moment to strike while bearing the weight of his anguish of seeing the woman he loved with another man. It is imperative for a leader to be level headed, a person that is ruled by their emotions is likely to make mistakes.

Arrogance: The unfortunate downside to being a genius is that you grow comfortable with the idea that no one is smarter than you. Underestimating your opponent is the most foolish thing you can do, even if your foe is actually less intelligent. Even fools can get lucky. It is entirely likely that Petyr will be the harbinger of his own demise because he will be outwitted by a “less intelligent” foe, and at that moment his façade of composure and restraint will dissipate, we will see the beast within.

In addition, Petyr develops alliances out of necessity, rather than camaraderie. He is just as willing to turn on his allies and befriend his enemies that the other way around, to further his position. He is the type of leader that will throw his employees under the bus (or through the sky hole), to move up the ranks.

Leadership Traits: While Petyr may come across as an ally, looking to cooperate for mutual advancement, in the end, it is all about his advancement. Petyr is the type of leader that can’t be trusted. He is self-motivated, biding his time to take over the Company and usurp power.

Cersei was born into power and money. She sees her leadership as divine, and she is above the “peasants” that work for her. She is the opposite of Daeneyrs in that she believes in a class system, and that people should stay in their own class.

Effective: She is entirely Machiavellian in nature, but you have to admit she is effective in achieving her goals. Cersei is entirely capable of leadership, but her vision for her reign is consistently interrupted by the claims of insufferable people for the throne a.k.a Joffrey (demon child) and Tomen (utterly spineless puppet). It is funny how the ones closest to us are often the ones that interfere with our goals. After her own son would not save her from imprisonment, she was forced to endure utter humiliation as her entire identity was stripped from her. The church and the Tyrells thought they had successfully undermined her authority and replaced it with their own. However, they were wrong, dead wrong. In one fell swoop, Cersei simultaneously eradicated all immediate threats to her authority and seized her revenge.

Antipathy: Cersei no longer has a drop of compassion in her; the only things she had ever loved were her children. Now all three of them have been taken away from her; she is a woman with nothing to lose. Someone that has nothing to lose can be their true self; unfortunately, her true self is a power hungry fiend that does not care about whom she has to kill or manipulate to achieve her objectives. For a leader to conduct herself in such a way inspires a rationale for betrayal. It is better to be loved than feared.

Leadership Traits: Cersei is the type of leader that runs their company with an iron fist … it’s my way or the highway attitude. They try to crush the competition, but often don’t do it in the most strategic or cost effective way.

Now Imagine That Busy Season at Work is coming:

The busy season in the office is comparable to the coming of winter; well, if you substitute the dragons for disgruntled customers, and the wars with deadlines that is. . .

So all in all, it is essentially the same minus all the exciting stuff; however, the point at hand is that you can survive busy season while following exceptional leadership.

The kind of leader I would follow naturally has a combination of all the best traits of my favorite Game of Thrones characters.

To me, an effective leader understands Solidarity, the boss should never ask something of his employees that he would be unwilling to do himself. If he asks you stay an extra two hours at work, he should be prepared to do the same, (and buy pizza). The latter is of quintessential importance, carbs and melted cheese are essential for higher cognitive functioning.

A little Charisma goes a long way as the boss shapes the office culture through their actions. If he or she comes in with an upbeat personality and greets everyone with a sincere smile and a hello she will improve the day of her employees. Unless, her employees are not morning people . . . in that case, just give them a small nod of acknowledgment, and buy a Box of Joe from Dunkin’ every once in a while. If you follow those simple procedures, you can even bring a little bit of joy and inspiration to your biggest morning grouch.

If at first you don’t succeed, Strategize. The boss needs to have a coherent plan of attack for the busy season. It is important to reflect upon the previous year to see where operations could have ran more smoothly, and then improve upon those systems. If the boss fails to create order in his own camp, his soldiers will be grossly unprepared on the battlefield.

Furthermore, a boss must be Effective. You can strategize all you want, but if you fail to employ the tactics you envision for achieving your objectives, then you will be ineffective. To execute a plan swiftly, you must reinforce the key elements of the mission to your employees. By promoting a consistent and coherent dogma of performance to your employees; there can be no miscommunication of expectations, or goals.

Lastly, remember that your employees are Human:

If you follow these guidelines I am confident that you and your team will survive and thrive in the presence of the upcoming challenges of the busy season; and you’ll be able to dispatch projects, deadlines, and the occasional white walker with ease.